Skip to content
HOME > LATEST NEWS > What is the olive oil boiling point? 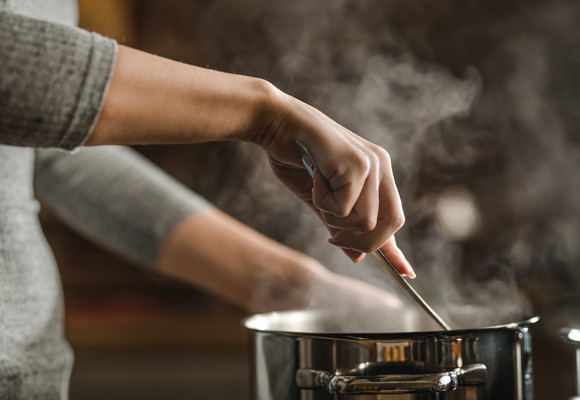 All liquids have a boiling point. I’m sure you have observed on countless occasions how water bubbles wrestle to the surface and then transform into steam when the water boils. Something similar to this happens with olive oil. The olive oil boiling point is reached at around 180ºC (356ºF), a high temperature when compared with water. At this point the oil may get hotter but will risk burning.

That’s right, although the oil is a liquid, it can burn; it is not like water, which simply evaporates and disappears. Olive oil is constituted of several wonderful nutritional properties that, when heated excessively, can burn and become spoiled. This is why it is extremely important to maintain control of the temperature of our olive oil, particularly when it is used for frying.

So, if you notice that the olive oil boiling point is about to be reached, control the temperature to make sure the oil doesn’t burn. If it starts smoking, it means the oil has reached its temperature limit. At that moment it is best to turn off the heat and not consume the oil, since both its flavor and its attributes will have been spoiled. To get more enjoyment out of your dishes, consume Carapelli extra virgin olive oil at its moment of highest quality.

The importance of the master oliari choosing the olive tree
The top 5 foods of a Mediterranean diet
When should you use extra virgin olive oil??

Put a new spin on the traditional Sunday roast wit

A good sauce recipe boasts the flavor of any meal

A healthy and comforting soup will surely warm you

Discover what you can do with meyer lemons and a q

Tuscany offers some of the best sensations in the

Cheers to a new year and new delicious recipes! #